The Jesse Davis Recall’s: “I did it because I could. It’s easy.” No real reasons necessary. 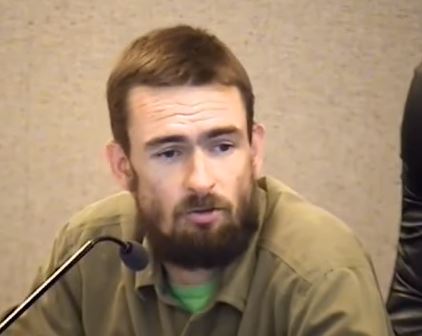 On this past Sunday’s radio show “Conversations with Sam”, 3 to 4 pm every Sunday on KFUG 101.1 FM, I had the pleasure of speaking with Mr. Jesse Davis, initiator of a recall effort for two of Del Norte County Supervisors.  This is not the first time Mr. Davis has been a guest on my radio program.   Previous conversations have been relegated to talking about the County’s approach to it’s impending voyage into the realm of recreational cannabis.  This time around, not that the continuing saga of recreational cannabis is not interesting enough, we both expanded our horizons to talk about his latest “great adventure”, initiating recalls.

Mr. Davis, who recently relocated to Del Norte County from Humbolt County, in order  to become involved in the local cannabis industry has also elected to venture into the local political arena, something not for the faint hearted.  While his main claim to fame at this point at least in this County, has been his involvement with the Cannabis Working Group as its chairman.  He recently has made quite a splash on the local political scene by initiating a recall on Supervisors Bob Berkowitz and Roger Gitlan.  No one at this point is exactly sure why, but perhaps I can give a bit of perspective based on his conversation with me on last Sunday’s radio show.

I think what has struck Mr. Davis as a complete surprise, was the explosion of vitriol he has received via social media about his recall.   As an apparent novice to the attention one can receive on social media, Mr. Davis was unaware of the common occurrence that engaging in political controversy brings out the dark nature of internet warriors and their inability to remain civilized. While I can have no expectation of Mr. Davis’ understanding that he has now crossed over into close proximity with what Supervisors like Mr. Berkowitz and Mr. Gitlan experience many times in an average day.  Being proactive in politics, moving the proverbial needle, inevitably brings out the people who think that you are pushy, bullying, maybe a little crazy and not in any way respectful of normal processes in their eyes.   You now may be able to relate to what it means to be in politics and have opinions that cross the line for probably more people than you currently listen.

Most politicians who wend their way through the political world, do so with the least effort to do anything, in order to benefit themselves and their friends for the most part at the expense of the public.  Dysfunction and progress on a governing board most often comes at the expense of having Board Members who push the envelope, and the response is similar if not more ratcheted up to what Mr. Davis is currently experiencing.  The more you become involved with the recall effort, the more vitriol you can expect. It is only those that are elected to office and make no effort to be proactive that are the true danger to a community.  This is something that you, in your insulated echo chamber, echo chamber not used in a negative sense, seemed to have missed.  Your stated goal in this recall is for the Board to be more proactive towards solutions.  The two supervisors you have targeted for recall are easily the most proactive.  People may not agree with their stances, but at least they have both core values and stances. Emotion, fear, and hatred are the least responsible reasons for anyone to prosecute change.  Those in your group which have your ear do not need you to provide yet another election cycle to satisfy frustrated egos and hurt feelings.  They need to grow up.

A further issue that seemed to appear during the course of our interview was Mr. Davis’ relative indifference to the whole process of another election.  He stated, “I started the recall because thousands of people,” (later reduced to a small group), “that I talked to appeared disenfranchised and I was doing this for them.”  His group was fearful of retaliation which made his action necessary.  Once the recall process began, it was Mr. Davis’ intention to fade into the background, BOMB THROWN.  This led to a part of the conversation where many in Del Norte County were characterized by Mr. Davis as really evil people and guilty of some sort of retaliation against any and all who opposed them.  Of course this ignores the fact that very often Mr. Davis’ “side” will be guilty of much of the same kind of behavior if not worse At that point, the suggestion was made that Mr. Davis really needed to broaden his circle of acquaintances, as I have found a more optimistic view of the people that reside in the County. Perhaps then he might find that there is another quite different side of the story.

As I mentioned to Mr. Davis during the interview that it appeared his reasons for recall could be considered frivolous and self centered.  By invoking the word “election”, Mr. Davis clearly wished to avoid giving attention to the frivolous charge and expect me to accept the word as an inviolate reason to pursue a recall.  “The process is so easy”.  ” It was a matter of filling out some forms, serving notices and placing an ad in the local paper”.   He further stated that he could not understand why more people, dissatisfied with their elected representatives, did not pursue the recall, no real reason necessary.  He felt it could be used regularly to spur political responsiveness from a political figure you felt was what; a bully, a scary person, some one you didn’t agree with, and for many other unstated  reasons?   It is clear that finding people who are willing to run for office is hard enough without subjecting them to the regular possibility that they might be Turfed out at the drop of a hat.

I am quite sure that all of this sounded quite reasonable on the surface in Mr. Davis’ mind, but the potential for abuse in the recall process is enormous and should not be taken quite so lightly.  An attitude of it’s a “great adventure”, we will just have to see what happens, and that I have no personal stake in its outcome, can easily become something very different when pursued to the end.  That end is just as likely to become something even worse than your worst nightmare.  It is for this reason that I am hoping that there is a much more serious concern involved causing him to take this step that Mr. Davis has not yet revealed.  As it stands, he appears to have pursued the recall process primarily on the basis of “he could”.  I am certain that the recall process was not meant to be used in this fashion.  As Mr. Davis has said “he could”, many others can clearly follow his lead and the County could be dealing in the very near future with a rash of recalls at great expense to the County.  Just because Mr. Davis thinks that Sheriff Apperson is universally  loved by all in the County, especially within his group, does not mean someone who doesn’t share Mr. Davis’ opinion won’t try to recall the Sheriff.  Just because Mr. Davis has stepped away from his recalls, doesn’t mean that he sheds all responsibility should the process he initiated and the resulting fall out could require a special election at a time when the County would be hard pressed to pay for it and the consequences of a failed recall.

This is not meant to be a condemnation of the ability of citizens to exercise their right to initiate the recall process, nor is it an attempt to dissuade anyone from going forth with the current operation.  It is meant to draw on personal experience to highlight a few of the things that should be included in the thought process before diving in to the mix.  I know this from having been involved in the initiative process for what seemed to be a very legitimate cause.   On reflection it was much more personal than any attempt to right a wrong.   While my action did not appear to have created any great and lasting harm, I am much more respectful of the process in hind sight.  I did not find that real respect for the process in this conversation with Mr. Davis. I do wish to let Mr. Davis reflect on these opinions and comments and perhaps respond either here or in an additional offer to continue our conversation next Sunday from 3 to 4 pm on KFUG 101.1 FM.  What say you Mr. Jesse Davis?  Inquiring minds want to know.

3 thoughts on “The Jesse Davis Recall’s: “I did it because I could. It’s easy.” No real reasons necessary.”