The Reality of Wind Power? 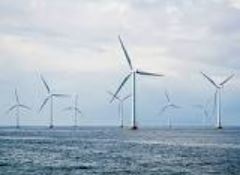 In a recent meeting of the Harbor Board, a great deal of “We have to
have a seat at the table”, was expressed by several Board members, but
what does that even really mean for the locals in the County.  Just as
we have been regaled with visions of grandeur and Santa Cruz like
extravaganzas on harbor property, it has been several months of waiting
for something, anything to happen.  Is Commissioner Stone and White
selling us another pie in the sky bit of fantasy?  Regaling us with
millions, no billions of future dollars that never seem to materialize?
The spending has already begun with an innocent sounding $1,254 to be
spent on another “seat at the table”.

I would venture to guess that the memory of the solar panel project,
which was guaranteed to generate thousands of dollars for the harbor’s
continuing quest to remain financially afloat has been carefully walled
off from public view, after it was learned that the project was left in
limbo following the demise of the vendor and the prospect of a
maintenance tab that exceeds the electrical cost savings from the
project.  Or the recent lease of two of the harbor’s RV parks to a
developer that has yet to commence the grand scheme of converting the
parks to palaces for high end vacationers.  And what happened to any
consideration for the current tenants, the fishing industry , harbor
deferred maintenance, or the dredging of said harbor?  Then there is
also the minor problem of repairs on the outer harbor seawall where the
injection of nearly $10 million is unlikely to get the job done. All
brought to you by the current Board, starring Commissioner “pie in the
sky” Brian Stone and Commissioner “fantasy world” Wes White, plus the
contributions from the three stooges, Rick Shepherd, Gerhard Weber, and
Harry Adams.  If the clown show stopped there, it would be a miracle,
yet Tim Petrick, the “visions of grandeur” Harbor Master was there to
complete the train wreck.

It seems that via the defunct, but soon to be resurrected Tri Agency, we
are now chasing a new “dream”, that of “wind power”. No one in this
cabal seems to be aware of the difficulties of the permitting process
that has pushed off shore wind power production into the realm of
financial excess, and has developers shying away from funding projects
already with East Coast Federal leases in hand.   That plus the mere
fact that the unreliability of wind power and the huge cost of
undeveloped infrastructure and transmission, has made wind power
developers begin to give off shore developments the cold shoulder.  And,
we have yet to mention the difficulties that wind power has experienced
in the harsh climate of the open ocean.  Clearly any sort of research on
the topic is beyond the capabilities of those that sit on the Commission
or its staff.  Much of the recent obsession with “Green Energy” has been
exposed as problematic and unreliable as a primary alternative to
natural resource based forms of electrical power production.  Not only
are “Green Energy” sources unreliable, but hardly make a dent into the
need for additional electricity and are unlikely to ever meet the needs
of most countries for some time to come if ever.

And there you have it, a train wreck waiting to happen.  Of course
electing some saner heads to a “seat at the table” of the Harbor
Commission,” most certainly without a cost of $1,254″, might be a good
place to start.  Consider Linda Sutter and Annie Nehmer as a fresh set
of minds that are not going to be enticed by dreams of sugar plums and
all the nonsense that currently occupies the empty heads that sit on the
Commission.  Solutions for the Harbor’s woes lie not with the current
elected Board and changes are necessary for the Harbor to be a truly
functional part of the County.  Development away from the primary
purpose of having a harbor is a mistake that will become very costly,
very soon. Sutter and Nehmer are the way to right the ship.

One thought on “The Reality of Wind Power?”