The Story for the First Christmas for Liberty 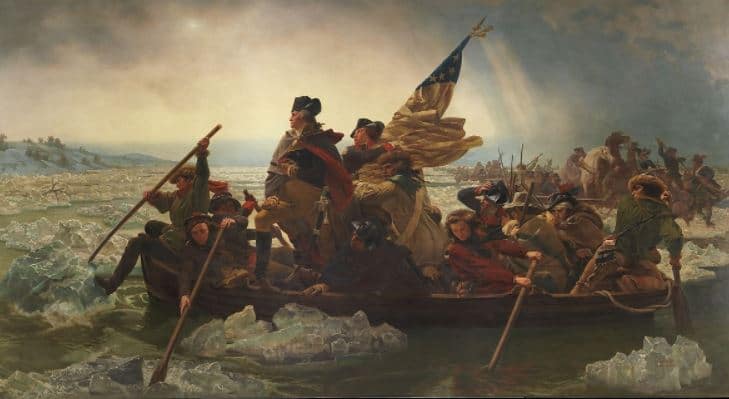 We have all heard the story of how George Washington crossed the Delaware on Christmas Night and defeated the British in a major victory for the cause of liberty. However, most of us do not understand how important that victory was for the fledgling nation.

Between July 4, 1776, and December 25, 1776, things were not going very well for the cause of liberty. First, George Washington lost the battle for Long Island. He then had to retreat from the city of New York. Next, a retreat had to be called after the battle of White Plains, followed shortly by the losses of Fort Washington and Fort Lee.

After all these defeats, the Continental Army was in full retreat as the Redcoats chased them across the state of New Jersey. It was clear that the city of Philadelphia would be in British hands in a matter of days. To make matters worse, many volunteers’ terms of service ended on December 31, 1776, and most of them had no desire to stick around a losing army. They were ready to return home and pretend that this liberty experiment had never happened.

It was at this time that Thomas Paine wrote the famous words that are contained in The Crisis.

“These are the times that try men’s souls: The summer soldier and the sunshine patriot will, in this crisis, shrink from the service of his country, but he that stands it now deserves the love and thanks of man and woman. Tyranny, like hell, is not easily conquered; yet we have this consolation with us, that the harder the conflict, the more glorious the triumph. What we obtain too cheap, we esteem too lightly.”

The night before they crossed the Delaware, these words were read to the troops.

Because George Washington was willing to go back into the fight after multiple losses, the light of liberty was not extinguished on December 31, 1776.

245 years later, this nation is again in a battle against tyrants. Our liberties and freedoms are under attack by the unelected bureaucrats. It has been sad to watch as the courts find a pandemic exception to our fundamental constitutional rights forcing families to make very difficult decisions.

In the same way that there were those telling George Washington that there was no chance to beat the Redcoats, there are those who think California is lost and that there is no way that liberty can be restored in California. I am not one of those naysayers.

I am an avid student of this nation’s history, and there are many examples where this nation defied the odds, and we put the tyrants in their place. As I travel around California, it is clear that there are major shifts of political thinking going on that will fundamentally change California politics. Some exciting polling data shows California will soon be more competitive, and I look forward to sharing some of this insight with you in the months to come.

Times may be tough, and it may appear that tyrants are winning, but this battle for liberty is not over, and I am glad to be a part of the effort to ensure that the light of liberty can shine for many more generations.

This Christmas, I am grateful for all those patriots who have not given up on California and are willing to stand up and continue this fight for liberty. I am thankful for those willing to work towards making California more competitive again.

Mark Meuser is running for US Senate