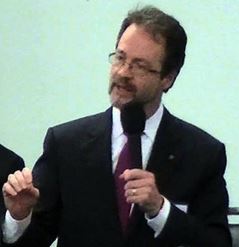 BY DONNA WESTFALL
“I will not tolerate discrimination in any way, shape or form!”

What happened to this gentle man to have him make such a strong statement. Albeit a statement that runs counter to much of what this county is all about.

“My wife is Persian. She has dark skin and oftentimes is mistaken for Hispanic or Native American. She had been carded at places that didn’t demand the same of me. And she has been denied treatment in a health facility because of her skin color.”

Aren’t the attributes we want in a Judge is someone that follows the law, follows the constitution, and is economically aware. Not someone who’s decisions are based on friendship or political pressure or political party.

Following up after his victorious campaign, I asked Judge-elect McElfresh lots of questions about people, personalities, policy and politics. To many of my questions his answer was “No Comment,” and for good reason. He must remain impartial or it puts his position in jeopardy.

To the questions he did comment on, his responses were reflective of the person and his experience. Here are some of the changes and benefits he hopes to enact in short order.

What does it take for you to become the presiding judge?
“It could take a year or longer. I have to take a course through the Judicial Council website.”
Once he’s the presiding judge, he oversees the Grand Jury. (in those counties or other jurisdictions with several judges, one of them is chosen to direct the management of the courts,usually on an annual or other

oversees the calendar, and chairs meetings of the judges.)
“We have a Blue Ribbon Grand Jury here. It’s not based on a cross section of our population which includes; White, Oriental, Native American, Hispanic, Black and racially mixed. Rather it’s based predominantly on our white population, the majority of them receiving invites to be on the Grand Jury. That’s not a fair mix or representation of our area.
That’s been one of my complaints (see Grand Jury System Broken published March 28, 2013.)

NIGHT COURT
Being Judge is a salaried position that he envisions will demand up to 18 hour days. His idea to implement a night court could be in place within six months, but if it happened within 90 days he’d be elated.
“My plan is to stagger current employees one day a month, without hiring additional people. This will allow people to appear in court after work hours. With the middle class being squeezed and the poor having a harder time, night court is really needed. We need to try it out for six months and see how it works.”

Right now, in order to secure a search warrant you need the signatures of three parties; a Judge, the DA, and a law enforcement officer. That means running around trying to find a judge and the DA to sign in person oftentimes in the middle of the night. In the meantime, it’s difficult to detain someone or preserve evidence if it’s whipping down the road.
With technology comes the advent of securing warrants though a conference call with the use of something as tiny as a Smart Phone. All parties can be on the line and the warrant executed within minutes.

“What about the systems that are broken?” I asked.  Let’s take accusations against Child Protective Services (CPS)because they are abusing and destroying families?
McElfresh understands the mandates of CPS. “When a case is in my court, I will deal with the mandate which is the reunification of families. Of course, there are always cases where parental abuse is so bad that reunification isn’t in the best interest of the child or children. But, it’s been proven that there is greater stability for a child or children to be with their natural parents even if dysfunctional than foisted into foster care or adopted out. There are many programs and classes that parents must take if they want to be reunited with their children.”

His final comments: “I’m honored to see the community put their faith in me. I will hold people accountable and will endeavor to deliver fairness to everybody.”

One thought on “The Thoughtful Judge: Darren McElfresh”