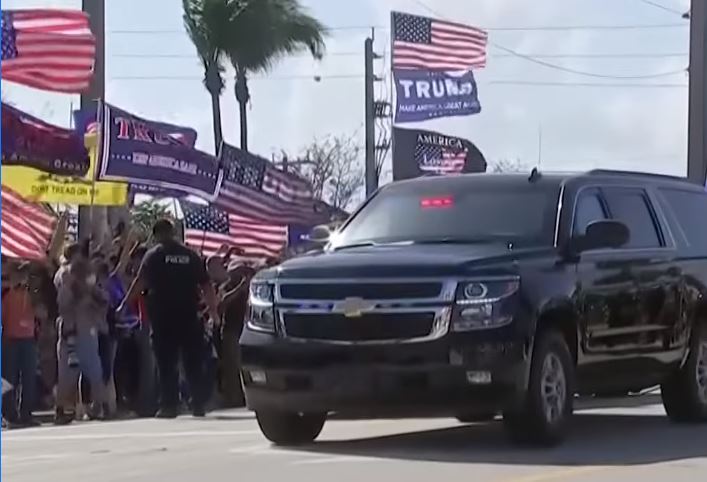 Right Side Broadcasting News has caught the feverish essence of American patriots proud of their 45th President by waving American Flags along with Trump flags, banners, T-shirts, baseball caps and signs just a short distance from Mar-a-Lago where Trump has been residing since January 20th.

Busloads of people from out of town are joining the revelers; while overhead a plane is flying this banner – “Best President Ever – Save America.” Chants of “USA. USA. USA.” can be heard on the video coverage.”

Interviews conducted on the street has one man stating, “He’s the most pro-life President…he’s got guts…. he’s got courage.” Another, “The greatest President in history.” Another woman said she’s going back to teaching because our education system has been broken for decades. “Students need to learn critical thinking.” Another woman from Nicaragua said, “One is for construction (Trump) and the other one is for destruction (Biden).”

One after another standing out there just hoping Trump would make an appearance. It’s 84 degrees and breezy. People that bussed in from parts of Texas where it’s freezing and the power is off were grateful for the sunshine.

They were hoping he’d make an appearance, but didn’t expect him. Finally, finally Trump’s motorcade drove down to the delighted screams, whooping, hollering and whistling of his supporters.