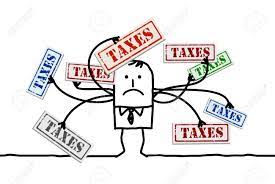 Recently I had the opportunity to talk with a couple of NO on T and U
voters who spoke about supporting the sales tax increase levied by
County and City governments.   The general impression I gained from
those conversations is that both governments have worked over time in
casting a picture of financial doom and gloom over their inability to
provide the most essential services to the areas residents.  The County
and the City have claimed to be unable to furnish adequate policing, fire
protection, or emergency services without the relatively minor amount of
funding that each Measure, “S” and “R” , have been used to supplement
the City and County’s coffers to fund these services over the last
eighteen months.

This seems to be the “talking points” being circulated through the
community along with the message that taxes are necessary to fund
government services that could “never be managed” by individuals alone.
The conversation inevitably turns to “its but a few pennies on the
dollar, hardly a significant amount and look at what has been
accomplished already”.   When the question is asked, ” what
accomplishments are you referring to?” the silence is deafening.  Most
will point to the theater of the City’s charade on H and 9th Streets,
but have little else to offer. Clearly, this is the extent of the impact
most have seen after eighteen months of Measure “S” and “R” spending,
because most cannot point to any improvements from police, fire or
emergency services.

Most that continue to support the increased sales tax are clearly
unaware of that large number of the citizens in the County that either
do not work for either the City, the County, or have a vested interest
in seeing the taxes remain in place.  They haven’t acquainted themselves
with the obvious.  People on the lower end of the financial scale have
endured rising costs from policies on the National, and State levels,
and now are contending with those on the local level.   They do not end
in the situation of not having enough to buy school supplies or clothing
for their children before school starts.  They do not have to contend
with being elderly and unable to afford medication.  They do not have to
make the choice between food for a beloved pet and themselves. They
haven’t a concern over paying to heat ones house this winter, or buy
fuel for their car to get to work.

It is one thing to be “cavalier” about the things that government claims
it needs, but when times are difficult for the greatest part of the
community, government should be able to tighten it’s belt as well.
Measures “S” and “R” are not the actions of a compassionate government,
nor is it a sign of “love and compassion” for those that struggle in
life.  People who are voting in November need to ask themselves, “Is the
health of local government in such a crisis state, that they cannot do
without the few dollars taken from those in need and still survive?”
The answer to that might be that Measure “R” funding represents less
than one percent of the County’s over all $182 million dollar budget.
The City would loose a mere 4.6% of its $43 million dollar budget.  The
community pool might have to have reduced hours, Crescent Fire and
Rescue might continue to be all volunteer, and Front Street will have to
wait for some grant funding.  The County would likely be completely
unaffected.  A recent report by the County’s Auditor-Controller painted
a rosy financial picture of the County’s finances.

Then again, have either the City or the County made any meaningful
progress in creating a measurable improvement in local fire, police and
emergency services?  Are law enforcement, fire protection, or emergency
services changed in any way that would reassure the public that
recognizable progress had been made? That was the promise in the lead up
to the 2020 passage of both measures.  Have either government fixed the
street in front of your house or business that made a measurable
difference?  Is the Community Pool or Beach Front Park the center of
your universe? Has the County made any progress to address any vital
infrastructure project?  The response from those that are in need of
some “love and compassion” from their local government was a universal
“NO!”   So, for those that still think emptying the pockets of the local
poor, the elderly, or the disenfranchised and claiming a “tourist” will
pick up the tab, where is your “love and compassion” for those people?

Measures “R” and “S” have had a devastating effect on the ability of many in
Del Norte County to survive.  One would think that the vested interests
of those that think local government is in financial crisis would have
some consideration for those that are actually in financial crisis.  It
is one thing to talk about the crisis state of vital government services
when that crisis pales in comparison for many who go without.  All the
love and compassion in the community will not make that go away.  There
continues to be a huge “divide” in this area over those that understand
what is meaningful for the local population and those that are unable to
have any concept of who a sales tax increase affects in the most
negative of ways.  For those citizens, I ask where is your love and
compassion for those that have not fared well in the age of Measure “S”
and “R”?  Do you think that you might find some between now and November
8th?

Vote YES on Measures “T” and “U” to lower sale tax and be that outlier
of love and compassion for those that are looking at a bleak future in
this County.  That’s YES on “T” and “U” for lower sales tax in Del Norte
County.