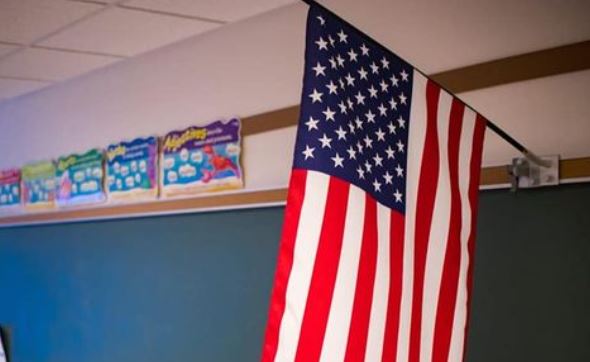 245 years ago today, the United States approved the design for it’s first flag. It happened at the Second Continental Congress.

Elizabeth “Betsy” Ross is often credited with making the first flag. In May 1776, three men, George Washington, Robert Morris and George Ross came to her and asked her to design the flag. Who were these men? George Washington at that time was head of the Continental Army. Robert Morris was a huge land owner and considered the wealthiest citizen in the Colonies. Colonel George Ross was a respected Philadelphian, signer on the Declaration of Independence and also the uncle of Betsy’s late husband, John Ross.

During the meeting she was allegedly presented with a sketch of a flag that featured 13 red and white stripes and 13 six-pointed stars, and was asked if she could create a flag to match the proposed design. She suggested a couple of changes, including arranging the stars in a circle and reducing the points on each star to five instead of six.

According to a receipt she was paid more than 14 pounds on May 29, 1777 by the Pennsylvania State Navy Board. I hesitate to try to convert how much that would be in today’s US Dollars. Betsy continued to make flags for 50 more years.

Since 1777 when the American Fflag was officially adopted, there have been 26 changes as more states joined the Union.

As time has passed, flag protocol has become lax. People commonly violate the Flag Code when displaying the Stars and Stripes on apparel, athletic uniforms or bedding. The only exception is made for military personnel, firemen, policemen and members of patriotic organizations who are allowed to wear a flag patch that is customized for their uniform.

Is it illegal to violate the Flag Code?

No. Even though it’s federal law, it’s more of a suggestion than a law.

The idea of burning the American flag would seem to be illegal and disrespectful but that too is protected under our 1st Amendment, Freedom of Speech.

Throughout our history people have burned and desecrated our flag.

* In the 1960’s, peace activists burned the flag to protest the Vietnam War.

*In 1984,  Gregory Lee Johnson, a Revolutionary Community Party member burned the American flag outside the Republican National Convention that was being held in Dallas, Texas. He was protesting the policies of President Ronald Reagan.

Although we’re witnessing the systematic destruction of our country due to the failed policies of President Biden, for today let’s respect our flag and all that it has stood for these last 245 years.