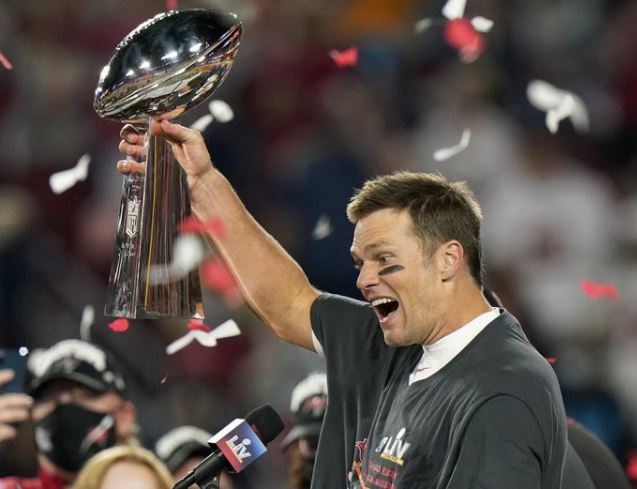 Sorry Chiefs fans, but the Buccaneer’s quarterback knows what it takes to win.  And fluoride-free water is one of his advantages; so instead of getting mad, campaign to remove fluoride from Kansas City’s drinking water.

Tom Brady, the star veteran quarterback of the Tampa Bay Buccaneers (formerly of the New England Patriots) and now 7-time Super Bowl winner, authored a book in 2019 on staying healthy in which he mentions fluoride in water.  At age 43, his athletic achievements are considered unprecedented.  In Brady’s book about how he stays healthy and in peak physical and mental form long after most younger athletes have faded, a key factor is keeping well hydrated while avoiding fluoridated water.

In chapter seven of his NYT Bestselling book (The TB12 Method: How to Achieve A Lifetime of Sustained Peak Performance), while discussing the importance of hydration, Brady acknowledges the risks of ingesting fluoride, advising readers to remove it from tap water by filtration.

“Tap water is water that comes from a municipal source. Depending on where you live, most sources of tap water contain fluoride, chlorine, and, in some cases, lead. Excessive amounts of both fluoride and chlorine have now been linked to a number of health risks. Drink tap water only if you filter it first, which gets rid of many impurities. Even when you use tap water for steaming vegetables, it’s better to filter it first.” [page 208]

The advice to avoid fluoridated water has a sound scientific backing, for those who are trying keep their bodies from the aches and stiffness that often accompanies aging.  A 2006 report from the prestigious National Academies of Sciences NRC committee on fluoride found that there is evidence that excessive fluoride intake may cause the pre-clinical stages of skeletal fluorosis.

Fluoride builds up in the bones over a lifetime of intake, and may lead to the early symptoms of skeletal fluorosis, which are stiffness and pain in muscles, joints, and bones.  These symptoms mimic arthritis, but no adequate studies have been done to determine how much a lifetime of drinking fluoridated water may be contributing to this widespread disease in many older people. The NRC 2006 report did conclude, however, that there was sufficient scientific evidence for there to be a concern for increased risk of bone fractures from the weakening effect of fluoride on bone.  The NRC even recommended that EPA reduce its allowable standard for fluoride in drinking water because of this risk, yet even 14 years later the EPA has failed to even consider that recommendation.

In the years since the NRC 2006 report, the adverse health effect of developmental neurotoxicity from prenatal and early infancy exposure to fluoride has overshadowed the risks of harm to the musculoskeletal system.  Recent rapidly emerging science has provided strong evidence that fluoride harms the developing brain leading to effects like reduced IQ.  The National Toxicology Program (NTP) is wrapping up a 5-year long systematic review of fluoride’s developmental neurotoxicity and has concluded the evidence is clear that fluoride reduces IQ in children.  FAN has addressed the lingering debate about whether doses from drinking fluoridated water cause neurotoxic harm.  FAN has shown the scientific evidence for developmental neurotoxicity is as strong at lower doses as it is at higher doses.

Brady does not mention that many types of filters will not remove fluoride, but for those avoiding fluoride it is important to use filters demonstrated to remove fluoride.

Additional quotes from Brady on health:

-“Our bodies become toxic when we ingest toxic chemicals.” [page 224]

-“Whenever the media claims any of the dietary methods that I pursue are new age or even quackery, I tell them that some of the biggest advertisers on television and in the stadiums I played in are marketing all the wrong things.” [page 224]