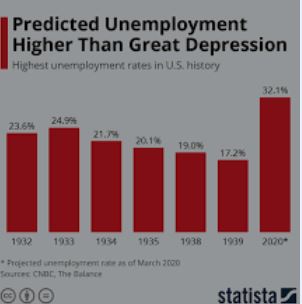 Over the past year much of the news concerned the state of the current
pandemic and our reaction to it.  It is well documented that our economy
suffered a significant blow as well and unemployment sky rocketed to
unimaginative heights.  In April of 2020 the US unemployment rate rose
by over ten percent to 14.7% While that may seem artificially low due to
the extensive effect of the lock downs on small businesses, it is well
known that the unemployment rate is often much higher due to the way
unemployment is recorded.

So how does it look for us in Del Norte County, an area where
unemployment is traditionally high, particularly through the winter
months.  According to the Employment Development Department (EDD) the local unemployment rate is 9.2%, while California’s rate over all is 9.0% as of December 2020.  The recent up tick in the rate was due to a recent surge in reported Covid cases which allowed California’s governor to impose renewed lock downs in November.  All in all for Del Norte County this seems to be very good news as the unemployment rate could very well be much higher.  And it is.

The report from EDD very rarely gives us a clear picture of the other
side of unemployment.

Most people understand that the EDD report of 9.2% is well below the actual rate in this County.

So how do we stack up against the rest of the world.  The actual rate
given as 9.2% is among the highest in the nation, where the unemployment rate is currently at 6.9%.  At the end of 2019 the US rate fell to an historic low of 3.5%, eclipsing a previous record from all the way back in 1969.  At the time the US was experiencing the 3.5% rate, Del Norte County was at 5.7%.

So what is it about Del Norte County that is reflected in persistently
high unemployment.  Most evaluations of this phenomena point to
educational attainment, age, and gender. Individuals that live in higher
unemployment areas also do not tend to migrate to places with greater
employment opportunities. When that is coupled with poor performance by local schools, it becomes clear why Del Norte’s unemployment rate tends to be higher than other areas in the state and the country as well.
Many of our employable youth either never complete their education, or
do so poorly that they never enter the job market.  If Del Norte County
is to radically change that dynamic education of our youth must become a
priority.