Update on Sewer Rate Protest – “Never Give Up” 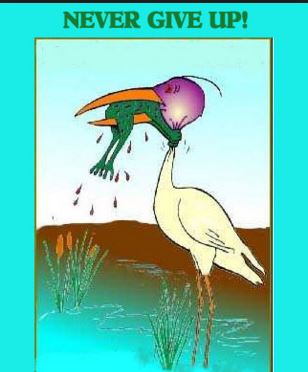 The sewer rate protest against higher rates is going strong, despite the many misconceptions of the public.  As a comparison, years ago, owners knew they could sign for each of their properties.  The questions then were commonly about tenants being able to sign. These days, many property owners think their tenants have to sign if their tenant pays the sewer bill.

An owner can sign for each one of their properties whether or not the owner pays the sewer bill!

A frightening fact.  A few business owners are afraid to sign even though they want to sign.  The reason; they’re afraid the City will stop doing business with them.

Fear of retaliation is real in this town.

A couple of people have said, “If I sign the protest on the 20% increase in sewer rates, my rate will go up.”

How did that logic get circulated?

If you don’t sign your rate will go up 20%.  Everybody’s rate will go up by 20%; even if you happen to be that single person hardly using any water.  Initially, your rates may decrease, but EVERYBODY’s rates will go up.

Many people have yanked the clipboard out of the signature gatherers hands and couldn’t wait to sign.

Councilmember Kathryn Murray gave her card to one of our signature gatherers telling her, “Your sign is wrong and tell Donna Westfall I said so.”

Could she mean that she, who voted to increase sewer rates by 20% spread out over 4 years, took offense to a sign that has, “Protest 20% increase in sewer rates.”

Typical Kathryn Murray.  She’s the one and same that didn’t want to investigate allegations of graft, fraud and corruption in 2009 on the wastewater treatment plant and preferred instead to co-author having me censured, removed from all committees with additional instructions not to contact and question any more sub-contractors.   All of this without an investigation because our city does not have a Censure Policy.   Instead they used the Code of Ethics as their tool. This is definitely something that needs to be changed.

Talking about logic, help me figure this one out.

“This place is so corrupt, nothing you do will ever change it.”  Every once in a while articles are published like this one on February 7, 2016 by Esther Yu-Hsi Lee at ThinkProgress.org:

“FBI Arrests Nearly Every Single Elected Official In A Texas Town” The indictment alleges that these public officials and this businessman solicited and accepted bribes in exchange for official action, such as voting to award city contracts to, waive certain tax payments by, and conduct certain inspections to give unfair advantage to those paying bribes.

One www.crescentcitytimes.com reader writes, “We should be so lucky.”

“They (our City government) always win.”

Why bother indeed. Yes, it’s common knowledge the protesters were cheated of their win back in 2008 and should have sued the City, but were too ignorant and inexperienced to do so. Realize and remember that Proposition 218 of the California constitution gives the ratepayers the right to protest.  If 50% + 1 valid signatures are turned in to the City by February 16th, then the protest wins and the City cannot increase the sewer rates for now.

How many is that?

Based on the City’s figure of 3,427 ratepayers, that means that 1,715 valid signatures have to be turned in no later than February 16th.

The goal of the Crescent City-Del Norte County Taxpayers Association is to see 2,000 valid signatures at the City.

Heather Murphy, Coordinator of the protest says, “We should have 1,500 protests in to the City by today. Our rate of 40 per day has jumped to over 50 per day.  More and more people continue to get involved in collecting signatures. If this keeps up we should be on target to have a nice cushion.”