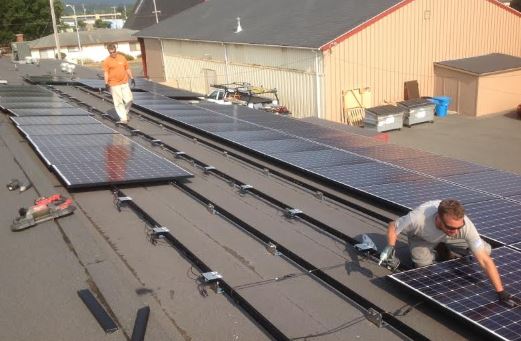 This solar project has been nearly two years in the works. Uncharted Shores Academy (USA Charter School) applied for and was granted Prop 39 monies to use at their school facility to upgrade to very efficient lighting and also put solar on the school.

It took some coordination to bring St. Patrick’s church and building committee together with Uncharted Shores School. The project was having some difficulty by school officials getting off the ground.  I took up the project because my two children go to that school.  An old friend, Tony Fogleman, was also helpful. The deadline for completion by the state of California Energy Commission for of all the projects was September 2018 and the deadline was closely met.

Together, those upgrades are expected to nearly zero out their electric bill. In other words, they should come close to generating the same amount of electricity in one year that the school uses thus they will not pay for any electricity or come close to not paying. It all depends on the year to year weather of course.

The solar project consists of 87 Panasonic 330 watt panels connected to 3 solar edge inverters which have a maximum output of 28.71 kW.

This solar project is expected to save the school between $1500 and $2000 per month. This is money that will be saved and put back into the children which is exactly what the program was designed to do; help schools become energy efficient and save money. This solar system is likely to be the third largest solar system in the county after Walmart and the Redwood Park North operations maintenance facility.

The final step in the process is currently underway with technical review of the solar project and adjustments in power delivery that Pacific Power needs to coordinate and approve. That process takes about thirty days. It is expected that this power generation system will become operational by the end of September.

Westhaven Solar out of Blue Lake was chosen for the project for the warranties on the electrical equipment, roofing and expertise. When the building inspector came to view the project he commented how professional and expert the job looked and even took a card as he is interested in solar for his home. This project is a great addition to the community.