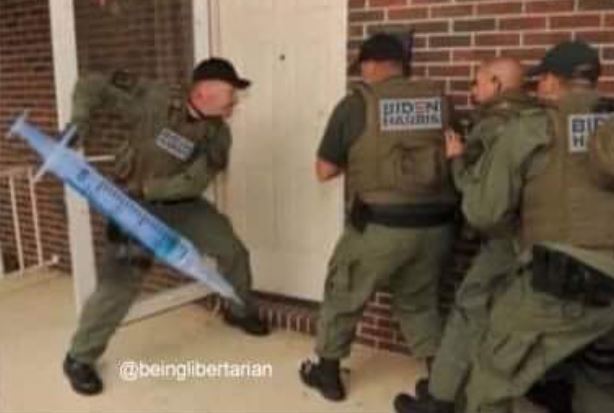 “Bad-boys, bad-boys, whatcha gonna do, whatcha gonna do when they come for you, bad-boys bad-boys.” This is not a “Cops” television rerun, but another intrusive decree by our duly elected President Biden. If we will not go and get our Covid shots, then they will be delivered directly to us at our doors.

What is our President’s rationale for this intrusion into our lives? It is said that the Federal Government bears the expense of covid medical expenses. The primary expenses are the vaccinations themselves, purchased from three American Big Pharma companies; enough medications for every man, woman and child in the United States. Unfortunately, only 50% of the gullible television watching public have been suckered into taking the jab. According to figures from the Centers for Disease Control (CDC) on July 8th 2021,  a total of 331,651,464  vaccine doses had been administered. However, this does not mean nearly all of the 332,507,155 people in the USA have been vaccinated. 183,237,046 people had received at least one dose while 158,287,566 people are fully vaccinated. In other words, 55% of the population have gotten one dose, and just under 50% have been fully vaccinated. The public should be aware that these first vaccines are only the beginning. New Covid vaccines will be required for each variant that emerges over coming years; and perhaps decades.

A sizable portion of medical professionals have refused to vaccinate against Covid. Why? Because these vaccines are still experimental and were released under emergency provisions prior to thorough testing. This means there are no precautions, contraindications, reactions to other drugs or dangerous side-effects noted. A sizable portion of the educated public who researched these vaccinations are also aware of the experimental nature of these medications. Many in the US Military have outright threatened to seek discharge when the Covid vaccine is mandated for all service-members in September 2021.

To continue the seemingly endless flow of money into the corporate coffers of America’s favorite class of citizens, it will be necessary for our government to kick-ass and take names of the mavericks that refuse the jab. To this end, White House Health Workers are being tasked to knock on all doors, establish and record if the resident has been vaccinated, “educate” the resident about the safety and benefits of taking the vaccine, and provide the vaccine immediately on-the-spot. Door to door vaccinations started in Milwaukee on July 9th 2021 and will be spreading nationwide. We are required by the spoken “Law of Biden” to disclose whether we have been vaccinated or not. Forget about Constitutional protections of privacy, due process, the enactment of laws by Congress and approval by the Senate. As it is spoken by Pharaoh, so shall it be.

For anybody with common sense, the writing is on the wall regarding President Biden’s most recent decree. Most folks will simply not answer the door, and White House Health Workers will wander the hot streets of summer while their vaccines sour from the heat, leading to even more money wasted.

Let’s consider Canada, if their citizens return from foreign travel and test positive for Covid, they are forcibly snatched-up and taken directly to government holding facilities against their will where they are housed at their own expense. Will we soon have police demanding we open our doors, a thermal reading taken from our foreheads, and a choice between taking the jab or quarantine at a government concentration camp at our expense?

Do not think for a second that this scenario is far-fetched. The Chinese Communist Party (CCP) uses such tactics, and considering the direction that the Biden Administration is taking, we may soon see the same practices in this country.

Why would anybody refuse to take this wonderful free vaccine that offers both protection and a long list of new freedoms? First off, there are thousands of people who have acquired Covid AFTER being vaccinated. These vaccines also have serious side effects that are not being addressed by the medical establishment. These same issues have been censored from mainstream news and social media. Johnson & Johnson’s genetically modified (GMO) vaccine had so many problems that it has been banned from use in many countries.

At the risk of appearing as a “Patriot Extremist,” there also those of us who “believe that our government has become corrupt and has over-reached Constitutional boundaries.” In my own case, I cannot shake the oft repeated quote “Those who ignore the lessons of history are condemned to repeat them.”

History is rife with examples of medications that caused serious side effects, including death; even after thorough testing. Consider Thalidomide which caused gross birth defects of children whose mothers used the drug in the 1950s. There are literally thousands of medications that have been pulled off the shelves due to serious complications that took years to surface. These are only the unintentional harms of hastily released medications. The medical establishment has been instrumental with intentional harm also.

Do a bit of research into Hitler’s nurses in Nazi Germany. The Nazis embraced their own brand of Critical Race Theory, which was promoted by their own mainstream media, encouraged by teachers as mandated instruction for classrooms throughout the land, and enforced by “Brown Shirts” as the only politically correct opinion allowed. The Bugaboo of the Nazis were Jewish. Similar to White Devils of today, who supposedly sell their souls to the devil for control of wealth and property, the Jews were demonized during Hitler’s Third Reich. Brown Shirts roamed the streets and launched random unprovoked attacks against elderly, disabled and women based on racial characteristics, much like those done today in many Leftist cities. The first Nazi mass murders were of “Mental Defectives” and those with genetic deformities, and were done by medical doctors and nurses. At first, few of these medical professionals knew of the SS programs, and those with weak stomachs were weeded out for other duties not directly involved in extermination. Most murders were accomplished with a syringe, though Zyklon B nerve gas eventually became the chosen method. After the elimination of “Worthless Defectives,” the “Final Solution” was extended to Jews, Gypsies, homosexuals, intellectuals and political opponents. This mass extermination by the medical community never became public knowledge til after the close of World War II; both the German citizens and most of the medical community were clueless. Nazi doctors and nurses incorporated into the SS apparatus went on to fill an active role with horrific medical experiments in the infamous concentration camps.

Ancient history? That was only one example from 80 years ago. “Medical Professionals” are involved in atrocious acts to this very day. In China, members of the Falun Gong  Religion, because of their healthy diet and lifestyle, have been routinely snatched from prisons or from the streets for forced organ harvesting. To obtain the freshest organs, they are injected with paralytic drugs and put on respirators while surgeons remove any viable organs for sale to “Medical Tourists.” At sometime during this process the donor “expires.” Where do these medical tourists come from? Mostly from the United States and Europe, where “medical professionals” present medical tourism as a quick and relatively inexpensive option to obtain life-sustaining organs. Who are the people who receive these transplanted organs? Everyday Joes and Janes who are either clueless where their donated organs come from; or simply don’t give a shit.

For me, my lack of trust in government, the medical establishment and Big Pharma in particular, disdain for our mainstream news media, and wariness of human nature in-general precludes taking these experimental vaccines. The roles that Dr. Fauci and virus expert Ian Lipkin with the Wuhan Lab prior to and after the release of the CCP Covid virus are questionable. Their subsequent roles in discrediting before the media as “Conspiracy Theory” any evidence or claims that Covid was engineered in the Wuhan Lab gives little support to bolster my trust in our medical establishment. The fact that the CCP has collected the largest worldwide DNA database is disconcerting also. Where does your DNA go after you take one of those popular new genealogy tests? Women who had prenatal tests administered by BGI Group in Europe and the Middle East probably had their DNA sent to Hong Kong, and ultimately to CCP scientists. BGI Group works directly with the People’s Liberation Army of China to “Improve Population Quality.” Developers of Bio-weapons create “Chimeras,” or animals bio-engineered with human DNA, in order for viruses to jump from animal to human. These viruses can even be engineered to seek and destroy specific genetic segments of society. Like in Nazi Germany, the innocent health worker relies on medical research and data provided by higher-ups. If this information originates from an entity working for the SS that is dedicated to erasing ethnic or racial segments of the population, the lowly front-line health worker would be totally unaware of any nefarious agendas. However, do not let this sway you.  After-all, this is still a free country where you can make your own medical decisions; for a while, maybe.

Arizona Senator Kelly Townsend advises that “No Trespassing” signs be clearly posted on your property to deter government medical intrusions. Such signs are necessary for local law enforcement to make arrests and prosecute the crime of trespass. A physical barrier can also be an aid for establishing “Breaking and Entering” to gain access to your property. Video surveillance can be helpful to both identify the perpetrators and prosecute the crime in court. Of course, most security conscious Californians have already taken these measures and more, given the release of tens of thousands of jail and prison inmates by Governor Newsom during this past year.