Vets Unhoused, How Did That Happen In California? 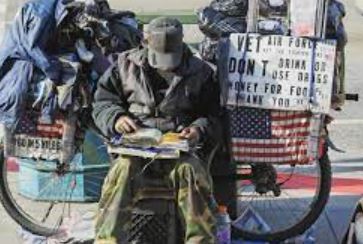 With all the posturing by both Biden’s Veterans Administration and our
own beloved governor, Gavin Newsom, it doesn’t seem possible that the
1200 individual living units on Federal property in Los Angeles promised
for our homeless veterans wasn’t a reality.  No, it is still a fantasy,
that forced itself into the real world of Biden’s Veterans
Administration Secretary, Denis McDonough when it was revealed that 40
homeless veterans were camped in front of Los Angeles’s West Los Angeles
Medical Center. Not that this hasn’t been a problem for years, but it is
amazing how “bad press” will get the attention of the “high and mighty”.
It just become the will to actually get something done that is the
sticking point for most of the “high and mighty”.

While the deadline for getting the vets in front of the medical center
housed is November 1st, this is unlikely to happen in the few remaining
days of October, at least not in any permanent sense of “housing”.
Remember those 1200 units promised for housing vets at the beginning of
this article?  After months of empty words only about 200 are in the
“planning stages”.  The developer cites California’s onerous building
and development regulations as the primary cause of the delays.  He has
further encountered a lack of funding due to the astronomical costs of
building anything in the State.  Any Help there Gov?

With so many train wrecks currently being fielded by Governor Hair Gel,
it is not surprising he is unwilling to miss an appointment with his
hair stylist, as excuses in front of the camera must be made with not a
hair out of place.  Thanks again to all the “NO” votes in the recent
recall election.  Let the federal government be responsible for the mess
in Los Angeles.  Get those slackers at FEMA to work.

Too be frank, it is unlikely that housing veteran homeless will curb the
problem.  Most vets require far more to address the many problems that
have caused them to be homeless.  Proper attention to their medical and
mental problems should be high on the list. For the most part these are
not incapable people providing they receive the attention necessary.
Pandering by the Veterans Administration Secretary is unlikely to bring
positive results. We have already seen verbose and insincere statements
at both the State and local levels that have not resulted in any gains
against homelessness but rather the reverse in numbers.

One can only hope His Majesty Newsom’s magic wand will work……eventually.