What is Measure Q All About: Part 3 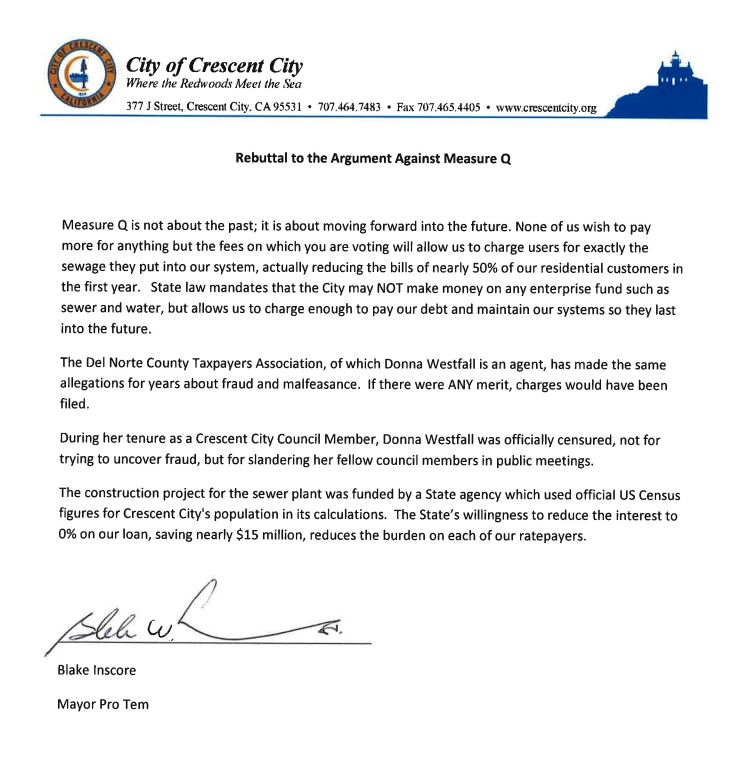 By Donna Westfall – August 10, 2016 – The allegations made by the local taxpayers association about municipal fraud and malfeasance is nothing new.  I allege municipal fraud and malfeasance has been going on long before I ever relocated to this area and it’s been going on for the 8 years I’ve lived here, even before the taxpayers association was formed.  As a matter of fact, while serving on the City Council, every time I brought up concerns of constituents connected to the loan and construction of the wastewater treatment plant upgrade/expansion (WWTP), the city would minimize, marginalize, and mischaracterize rather than give concrete answers. Here’s a prime example.

On many occasions, I would ask how the loan commitment went from $19.6 million in fall of 2006 to $42.5 million and then became $43.8 million in March, 2007. Normally, any sane business person would want a spreadsheet detailing exactly how the new loan could be repaid.  THIS WAS NEVER DONE!

It was no surprise to many people of the public to hear that the loan was in default within 3 years.

The Grand Jury of 2008-2009 NEVER addressed the issue of how the loan was to be repaid.  Here are some of the key items the Grand Jury deduced:

“Too much responsibility was delegated to the Department of Public Works, which was focused on getting the Project done, rather than on keeping open the necessary lines of clear communication with the rest of the City.”

Who was the Director of Public Works?  Jim Barnts.

Who was one of the major real estate developers?  Jim Barnts

Do you begin to see a pattern?

How could Jim Barnts and his buddies develop low income apartments behind WalMart without sewer/water hook-ups?

And why didn’t the City Council of 2007 INCREASE hook-up fees to developers at the same time as increasing sewer rates to ratepayers?

It seems like a no-brainer that it was in Barnts best personal financial interests to get the WWTP finished as long as it did not cost more to Barnts.

Now, why didn’t the City Council of 2008-2012 investigate many of the allegations?  Well……it’s like this.  While Kathryn  Murray sat on the City Council, my experience of her is that she didn’t believe in questioning staff. So when you go to the ballot box and think about voting for Murray for Supervisor 1st District, ask yourself this question, “Will she take my concerns into account as a constituent, or will she continue to rubber stamp staff recommendations?”

The woman has zip, zero, zilch understanding of running a business. She once accused me of single handedly causing the city to go bankrupt.  Here, she’s the one with zero comprehension of fiscal responsibility by continually burdening the ratepayers with ever increasing sewer rates while NEVER questioning the insanity of a $40+ million loan and how it could be repaid.

Bottom line, this city could only afford a $20 million WWTP upgrade/expansion. I said it before the 2007 City Council and keep pounding on that same drum because the facts do not change.  They could never afford twice that amount. And that’s one of the reasons why the City has to continually go back to the Water Board and ask for concessions. They did it when they increased the 20 year pay-back to 30 years.  And they did it again when they asked that interest be eliminated.

So we have a City that refuses to investigate. and now their response and rebuttal to the Argument Against Measure Q involves their typical lack of research, reading documents and questioning:

Here’s what you need to consider when you read the following rebuttal by the City:

“If there were ANY merit, charges would have been filed.”

Response: This is FALSE. The Grand Jury received many complaints about the WWTP.  The Presiding Judge was William Follett.  We have discovered that the investigations supposed to be conducted by the Grand Jury were halted and hindered by Follett.  If a true investigation had been conducted, then the possibility of a Criminal Grand Jury could have been convened with an eye towards issuing indictments.

New complaints will be submitted now that Darren McElfresh is Presiding Judge.

“During her tenure as a city council member, Donna Westfall was officially censured, not for trying to uncover fraud, but for slandering her fellow council members in public meetings.”

Response:  This also is FALSE. At issue was a 2009 City Council meeting wherein I asked Former Public Works Director, Jim Barnts, if he was getting any kick back from sub contractors on the WWTP.

That is not slander. Nor did the Council censure me for slander.

Here is the City’s response: One thought on “What is Measure Q All About: Part 3”