What is the spice of life? 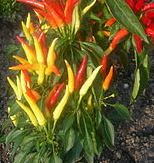 Let’s do some free form thinking, starting with a spice called Paprika. Did you know that it originated in Mexico and was taken to Spain in the 16th century? It is made from red air dried fruits called Capsicum annuum  more commonly known as everything from bell peppers to chili peppers?   The spice can range from mile to hot depending upon where it was grown (country)

You can purchase it for as little as a $1 per bottle at the Dollar stores or up to $6.99 for Organic, non-GMO varieties. It adds a beautiful orange-red color to dishes and frankly, I always thought it was a vegetable not a fruit.

And now on to another subject.  The Del Norte Triplicate.  They ran a lovely article written by Jessica Cejnar on my friend, Vickey Stamps, (Published December 27, 2016 -“Stamps Stitching Her Final Doll”) BUT, I can’t send the Triplicate a complimentary letter to editor BECAUSE I have been banned, banished, sent to the Hinterlands. Grrrrr!

Let’s move on….. to the increase in minimum wages.

Is our State not going to be happy until they chase the majority of employers out of the state, making it impossible for smaller businesses to stay in business, and in essence creating inflation for all the rest of us living in this once great state? I can’t think of another reason or better reason to put the final nail in the coffin for continuing to be a part of California and think seriously about becoming the State of Jefferson.

Why doesn’t our state reduce and eliminate  the thousands of government jobs to reduce expenses?  Then  many of those former government workers could join the hourly ranks of minimum wage earners or stand at the unemployment lines, signing up for things like food stamps. It’s time government got out of the  business of controlling every aspect of our lives and let our once capitalistic society determine the wages due to workers.

Speaking of increasing or decreasing costs and expenses…. mark my words….. the Crescent City, City Council will cave in more more time as they increase the rate on Attorneys Bob Black and Martha Rice’s contract ONCE AGAIN, when they ought to be on the look-out for another attorney or firm that doesn’t represent every Tom, Dick and Harry in town..  And, watch as they increase wages for employees when they ought to STOP THAT and reduce wages.

Why, you ask?  Because the ballot box  at 57%,  told the City that increasing sewer rates 20% over the next four years was not acceptable. The City has to cut expenses and how will they do that when they have already notified the Water Board that they are operating on a bare bones budget.   Pffftt!

FYI – I went before the City Council after the election and told them let’s identify the issues and let’s work together on solutions.  Nobody has bothered to call, email, fax or text so far.  I don’t hold out much hope for the new city Manager, David Vandermark.

Speaking about our local government, do Crescent City and Del Norte County government employees have to worry about CalPERS being around when they retire? Things don’t look very good at CalPERS.

Have you made up any New Year Resolutions?  Did you know the top, number 1 resolution is to LOSE WEIGHT?

Let’s end on a positive note.  Recently an out of town woman commented on Facebook that her Uncle, a Vet, living in Crescent City found himself without food.  People responded and her Uncle was showered with the Christmas spirit in many forms.  Boxes and plates of food were dropped off and someone even gave him a gift card to Safeway.

That’s the kind of stuff that makes this city and the people in it special.