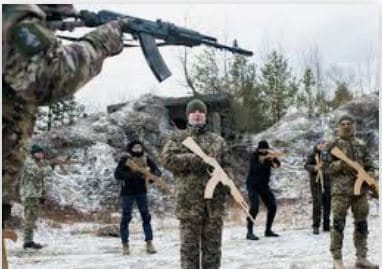 As Russian President Vladimir Putin escalates his invasion designed to topple Ukraine’s democratically elected government, Kyiv is pleading for as many anti-tank and anti-aircraft weapons as possible. While the Biden administration on Saturday approved additional military assistance for Ukraine, there is more the United States and its NATO allies must do — and fast.

That should include expediting and expanding existing shipments of weapons, focusing on what Ukrainian forces need most and what can be delivered quickly. NATO members should not stop there, however. The United States should work with Kyiv to open multiple supply lines to Ukraine to facilitate the delivery of weapons and other supplies, while providing the Ukrainian military with actionable intelligence it can use to target invading Russian forces. To get ahead of the evolving conflict, the United States and its allies should also focus on getting Ukrainians the tools they will need for urban warfare against occupying Russian forces.

As we watch this tragedy unfold in Ukraine, the bad news is the Biden administration, Ukraine, and NATO allies were unable to deter a Russian invasion. The good news is Ukrainians are fighting hard and Western weapons are helping them defend their country.

U.S.-made Javelin and UK-made NLAW anti-tank missiles have proven deadly against Russian ground vehicles. Ukrainian forces defended themselves in 2014 with only “RPGs and it was difficult to destroy T-72 [tanks],” a Ukrainian military official reportedly said. Now, thanks to Western weapons, “it’s not a problem.”

The success of these weapons is encouraging, but they will be expended and lost as combat continues. Some experts suggest the Ukrainian Army will start to run out of ammunition in a week and may run out of Stinger missiles and Javelin anti-tank missiles before then. Russia has not yet committed its full military might, so the Ukrainians will need all the anti-tank weapons we can send.

We should send all the small arms, grenade and rocket launchers, ammunition, night vision/thermal imaging equipment, rations, medical supplies, and communication devices the Ukrainian resistance needs to operate effectively and communicate securely in the brutal urban warfare likely to become more prevalent in the coming days. Small drones for conducting intelligence, surveillance, and even attack in urban fighting would be helpful, too.

However, delivering the weapons is more complex than deciding what to send. With aid flowing from so many countries around the world, the U.S. military should use its unmatched logistics capabilities to coordinate supply efforts.

A senior U.S. defense official said Monday there is no single unified body coordinating aid. In addition to shoring up NATO’s eastern flank, this should be a top priority for U.S. European Command. This materiel should continue to be delivered via Poland, but NATO should also work to open supply lines from Slovakia and Romania, as Hungary has disappointingly refused to allow lethal weapons to transit its territory.

It would be unwise to presume Moscow will not try to interdict weapons shipments to Ukraine once they arrive. We should assume Russian agents on the ground and Russian ISR assets are closely monitoring the border crossings into Ukraine.

Additional supply routes will enable faster delivery and help prevent bottlenecks at the border. Moreover, having multiple routes will reduce the risk of interdiction, since a single supply corridor would be more vulnerable to Russian strike assets.

NATO-operated NASAMS, SAMP/T, and Patriot air defense systems should be redeployed on NATO soil near the distribution points to deter Russian interference. The United States could transfer to Ukraine Avenger and M-SHORAD mobile systems to escort the shipments once in Ukraine.

To bolster Ukrainian defensive efforts, the United States and its allies should also provide Ukraine’s forces with real-time, actionable battlefield intelligence. The EU will soon begin sharing satellite intelligence with Ukraine and should prioritize timely delivery of the information so Ukrainian forces can act on it. This should include advance warning of major Russian military movements along with targeting information focused on Russian ground, air, and naval assets operating within Ukrainian territory or conducting attacks on Ukraine from the Black Sea.

NOTE: The entire article can be seen at Foundation for Defense of Democracies on line.