Who is Hakeem Jeffries? 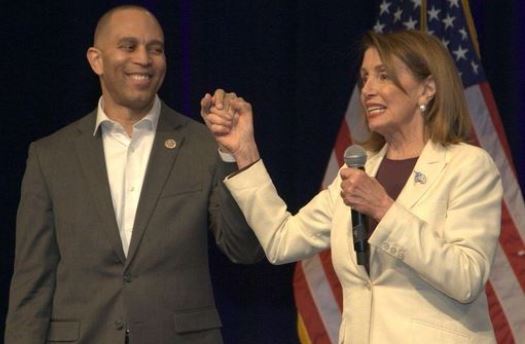 At 10 am this morning, the House of Representatives opened today’s meeting with the Pledge of Allegiance.

Part of the schedule includes the vote for the new Speaker of the House. If Kevin McCarthy does not make it, could New York Congressman from the 8th District secure the title?

Let’s look at Hakeem Jeffries and his stance on America, Biden, Democrats and Republicans.

Granted, Republicans did not sweep the elections as predicted. Democrats expect “revenge hearings” once Republicans have control over Congress. Get this. Democrats unanimously selected Jeffries to succeed Nancy Pelosi at the start of the new Congress. He is the Minority Leader. How is it that Republican’s can’t seem to agree unanimously on most things?

Jeffries has pointed out rightly that Republican New York Rep-elect for the 3rd district, George Santos, clearly has an ethics problem having made-up much of his biography. He gets points for that one.

23 hours ago, Jeffries tweets, “…. heading to DC to put continue our effort to defend democracy and put people over politics.”

Then there’s this: Although young, 52 years old and Black, and a lawyer known for his advocacy for housing and criminal justice reform, not only voted to impeach Trump, but became the Democrats Impeachment Manager.

He is an excellent speaker. His district is very diverse with a large black population and Jewish population. He tells you he is for diversity, that diversity is a strength and he tells you he is for the rule of law regardless of race, background or sexual orientation. Then he’ll go on and on about Trump should be impeached and witnesses are needed before the January 6th “witch” (my term not Jeffries) committee.

The January 6th Committee subpoenaed President Trump but later withdrew that subpoena. When they use the term insurrection I want to cringe. People with cell phones taking pictures and recording video while rushing the capitol does not an insurrection make. But here we are years later with people still incarcerated. Rules of law, my ass. That January 6th Committee is set to dissolve today as well it should.

Politicians that ignored the subpoena by the Jan 6th Committee: House Republican Leader Kevin McCarthy and four other GOP representatives about their involvement with Trump’s attempts to overturn the 2020 election:

What did Trump do when subpoenaed? He sued them.

I’m an American and overwhelmed with supposedly intelligent people not being able to define something as simple as “what is a woman, ” having people in the Biden cabinet look like a freak show like Dr. Rachel Levine the first openly transgender, highest ranking transgender official in the US government, an economy in the sewer, national debt higher than ever, and let’s not forget 87,000 more employees added to the IRS payroll…. wouldn’t one think that maybe it’s going to be harder for someone like Jeffries to try to work across the aisle?

If anyone should be impeached it should be Biden for just the fact that he was so stupid about the way he left Afghanistan. But Jeffries doesn’t talk bad about Biden. Noooo. He supports him and the wonderful work he has accomplished since taking office.

Let’s look at just one of those wonderful things Biden has done since taking office and has the support of Jeffries. Inflation!

Closing the Keystone pipeline. From there like falling dominoes, gas supplies and prices have been a problem made by the Biden administration. Rising gas prices cause inflation.

How about allowing illegals to flood our borders and pouring into our country and providing them with FREE medical, housing, and drivers licenses. So while our own citizens including vets languish in poverty, does Jeffries applaud Biden’s halting border wall construction, decimating ICE and US Customs and Border Protection while increasing fentanyl smuggling and causing the outrageous deaths of Americans age 18-45; now considered the leading cause of death.

I just don’t understand the mentality of American’s that are ok with over 60 million abortions over the last 50 years, yet want to let in millions of aliens some with COVID, some with TB, all without medical records. Let’s look at Jeffries view about Roe v Wade being overturned, ““The decision by the runaway, radical, right wing Supreme Court majority to take away the long-held right to have an abortion is an assault on freedom, the Constitution and the values shared by a majority of Americans.”

The Declaration of Independence made it clear with words like…’ endowed by their Creator with certain unalienable Rights, that among these are Life….”.

Sure. He’s going to work across the aisle. Sure. If you believe that, I’ve got a bridge to sell you.

Just remember in 1973 when Roe v Wade went into existence, we were told NO TAXPAYER MONEY WOULD BE SPENT ON ABORTIONS.” Why? To appease those who felt that abortion was tantamount to murder. These days so many think it’s ok to kill right up to birth and even after. After all, it’s a decision between a woman and her doctor.

If that’s not murder, we need a new definition of murder.

I don’t know about you, but Jeffries would not be my first choice, second choice or third choice to be Speaker of the House.