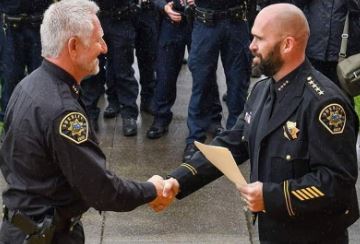 He is the new Sheriff of Del Norte County for the past two and a half-weeks. What better opportunity than the present to introduce him to Del Norte County. Sheriff Waltz assumed the position upon the pre-mature departure of former Sheriff Erik Apperson, Oct 1. Sheriff

Randy Waltz was hired in the newly created Undersheriff position last year and the Board of Supervisors appointed him Sheriff through the current term expiring Dec. 31, 2022.

Sheriff Waltz is a San Joaquin Valley product, born and raised in the foothills east of Fresno.

He graduated from California State University Sacramento in Engineering with an emphasis in Vocational Education. Sheriff Waltz spent a decade and a half in the City of Fresno Public Works Dept. and another decade with the Tulare County Sheriff Dept before joining Fresno County as a District Attorney Investigator. On one of his many visits to Del Norte County, he met Erik Apperson and the rest of the story is history.

I asked the new Sheriff to please share his vision. Does he see himself as a caretaker or is he a candidate for his own four year term?

No and undeclared, respectively. No, he’s not a caretaker. He’s a hands on guy, a doer not a talker. He and his wife are mulling over his future as we speak. Of the 26 Sworn law enforcement deputies, 22 are in-the-field law enforcement officers. Two Sgt. and four Deputy slots remain unfilled. In the non-sworn positions, a Corrections technician and two dispatcher positions remain open.

*High level of training which is very expensive is and remains a high priority. To trim costs and keep staff working, Sheriff Waltz is bringing the training to Del Norte rather than sending sworn staff to far-away sites which involve long one-way locations, like Sacramento. One such training is elevating ALL deputies with Specialized Investigation Training. Sheriff Waltz knows this discipline very well.

The Sheriff has instructed his deputies to involve themselves in all matters law enforcement and solve many pesky issues that are complicated by delineation of jurisdiction, City and County like Skateboard Hill (City) to Preston Island (County). Many of you read the Sacramento Bee piece, yesterday on ” No Law North of the Klamath, ” a not so nice eight page article on deputies who behave poorly, even committing felonies and escape the not so longhand of justice. Sheriff Waltz promises and commits himself that his Staff will not evade appropriate admonishment, discipline, and if warranted, prosecution by the DA.

I like what I heard and saw with my first meeting as a private citizen with Sheriff Randy Waltz.

I found the Sheriff to be accessible, candid and frank. We agreed to meet again.

From a personal point of view, I hope he does run for Sheriff in a few short months, but for now he can walk unnoticed into Wal-Mart, Crescent Ace Hardware or Sutter Coast Hospital, anonymously; that will change very soon.Good Luck Sheriff Waltz.We will be talking with you soon

4 thoughts on “Who is Randy Waltz?”