WILL THERE BE JUSTICE FOR KENNETH JONES? 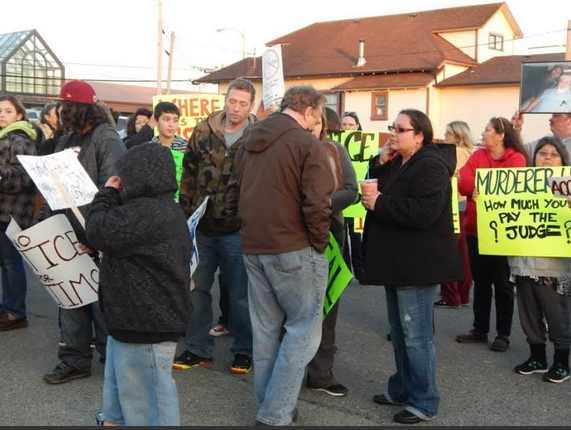 Coulter Mann didn’t take a gun and deliberately set out to shoot somebody.  That would be murder, right?

What he did was drink too much, jump in his vehicle, talk on his cell phone while driving and kill Kenneth Jones in a collision.  And for that the Judge pronounced a 3 year prison sentence.  Sound fair? Don’t think so.

Family, friends and community members staged a protest across the street from the Sherriff’s station at 5th & G Street,  Monday night, March 10th, while Coulter Mann turned himself in.  Questions on everyone’s mind are pretty obvious.  Was the Judge bought off?  Why was the 6 year sentence reduced to 3 years?  Why is Judge Richard Kalustian even thinking about changing Mann’s sentence now? Was the Judge bought off?

Intent on getting justice for her father, Kendra Jones, spoke to Channel 3 News during the protest which was aired on the nightly news.

A community member has contacted Mother’s Against Drunk Driving (MADD) to begin the process on getting national exposure.

This is not going to go away unless and until there is Justice for Kenneth Jones.

It’s really ironic that Del Norte High School has a yearly event which tries to teach students to not drink and drive by staging an event so real if you happened upon it you’d think a real emergency was taking place.  Ambulances, stretchers, crashed cars with victims covered in fake blood all make the event a dramatic learning tool.  Maybe it’s time for the Del Norte County Unified School District to send all their principals, teachers, staff and Superintendent to this event to learn those same valuable lessons.  If you drink, you don’t drive.

2 thoughts on “WILL THERE BE JUSTICE FOR KENNETH JONES?”