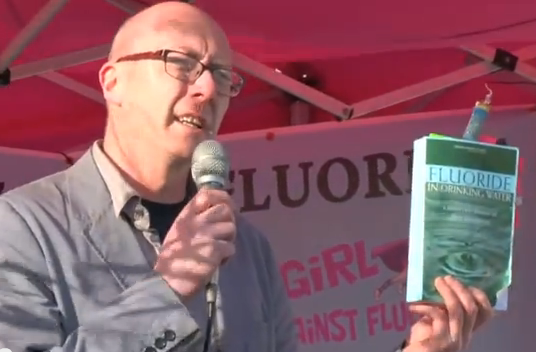 *  Interesting that the Water Utilities Company in Tacoma, Washington State reported that the lead levels in drinking water dropped by 50% when they stopped adding fluoridation chemicals to the water supply.

*  The Australian Government had established a panel to review fluoridation. The panel was to be open to public selection but not a single person nominated by the public was included in review panel. The majority of the panel are pro-fluoridation. Lastly, the terms of the ‘review’ allow the panel to only review material published from October 2006. That means that the single largest most important and comprehensive scientific review yet undertaken, by the US National Academies of Science and Medicine published in March 2006, is actually excluded from the review. What a whitewash, before its even started.

*  One of the largest population centers of the United States that has stopped artificial fluoridation of drinking water is Puerto Rico (population 3.6million). Between 1948 and 1955 the US installed 220 water fluoridation schemes serving almost every community on the island. At this time it was the most heavily fluoridated population on the planet. U.S agencies such as the Center for Disease Control and Prevention who are the major body promoting fluoridation continue to report that fluoridation is ongoing in Puerto Rico. I have been in contact with the health department in Puerto Rico who have confirmed to me that they stopped fluoridation more than 20yrs ago. Why has it never been acknowledged by the US authorities that Puerto Rico stopped fluoridation. Why are they deliberately suppressing and censoring this information? And what was the real reason why Puerto Rico ended its relationship with water fluoridation. Clearly the US do not want their own citizens in the US mainland to know that the citizens of a US territory have rejected water fluoridation, perhaps in case US citizens might actually question why the policy is still ongoing in mainland US. Its the exact same with Israel, no US network or mainstream US media organization has reported that Israel has recently stopped fluoridation of its population. One has to ask why is this information being suppressed?

*  In 2007, asthma cost the U.S. a total of $56 billion, that’s a lot of money for pharma companies and health practitioners. No wonder they don’t want to stop fluoridation in the USA when its the biggest single contributor to asthma.

*  Made a fascinating discovery that everybody should know about. People with blood group O and B have higher levels of alkaline phosphatase, a protein that when elevated is associated with numerous diseases including cancer and asthma. Scientific research has demonstrated that Fluoride stimulates activity of this protein in humans and it has also been identified as a key causal factor in the development of dental fluorosis and osteoporosis, in its functioning role in skeletal mineralization and tooth formation. The genetic populations with the highest percentage of people who carry this blood group are found in countries that practice artificial fluoridation including Ireland, USA, Australia and UK and Brazil. In these countries almost 50 per cent of people have this blood group. Scientific studies have found that in areas with fluoride levels below 1ppm people with blood group O and B are significantly more at risk of developing dental fluorosis. Why because they already have high levels of alkaline phosphatase and fluoride stimulates the activity of this protein. That’s how genetics plays a critical role in fluoride toxicity and why we have seen an 18 fold increase in dental fluorosis in Ireland since fluoridation began. It is also why osteoporosis levels are much higher in Ireland than in UK or Northern Ireland who have the same percentage of people with Blood group O but only 10 per cent of population is fluoridated in UK and none in Northern Ireland.