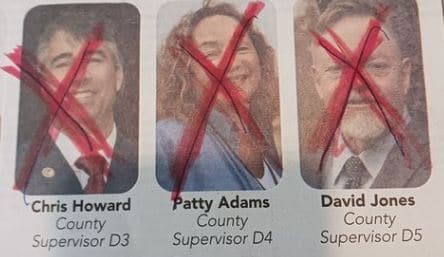 The Local GOP wants you to believe these people will make a difference in our County as supervisors. Why would you take this local GOP as gospel when the very people advocating for these people are as corrupt as the folks in the photos.

Chris Howard who gets paid by the Alexander farm has proven in 8 years he has not only been unsuccessful in running our County, but demonstrates how he uses his position to buy his family airline tickets to Japan. By using his employee discount via through the county. He has demonstrated how he talks a lot of noise and gets nothing done.

He keeps the fact that land poisoned by Lilly farmers and affecting the water in Smith River  under wraps so he can earn $60,000.00 per year as a supervisor who is supported by the farmers.

Patty Adam’s is about as knowledgeable as the piece of paper she writes on.  Her entire adult life was in major cities . She woke up one morning and decided to fill Gerry Hemmingsen’s shoes as a Supervisor and has no idea how to run a meeting, much less attend one. She is entirely disconnected  with the public and makes sure she is unavailable  and she has little understanding of governance.  MISS Adam’s will continue to drag Del Norte down the trenches to no return because she doesn’t understand the fundamental basics of what our County is going through.  We do not need more of the same.

David Jones certainly would not represent district 5 because he doesn’t get along with the tribes now making him supervisor would not make that situation any better. This was stated through his own omission.  Mr. JONES LIKES to rubber  stamp and we certainly don’t need more rubber stampers that is what got us in this situation as it is.

Hank Akin is running against Chris Howard. Hank is making a very powerful statement in his platform. One Howard cannot refute and people are taking notice. Hank Akin won’t back down to unreasonable politicians. He will fight for this County and resolve issues facing  his constituents. Up until last week most people in District 3 didn’t know who Chris Howard was because Chris Howard is ghost until elections and after them.

Joey Borges grew up here and never left. He is a strong advocate for our youth. He has raised his family here, a board member of Parent teachers Association and created his own successful business. He is honest and hard-working, something the GOP candidates seem to lack.

Dean Wilson is a strong individual who has years of experience in government. Because he knows the  in and outs of  government entities this is the kind of knowledge we need to turn our County around.
Together with Akin, Borges, and Wilson I believe this our time to get our County out of debt. Get our County turned around in the right direction by 3 men who will stand up and fight for the people.
It’s all up to the voters but these are the only candidates with a strong backbone. The rest of the candidates are simply too weak.