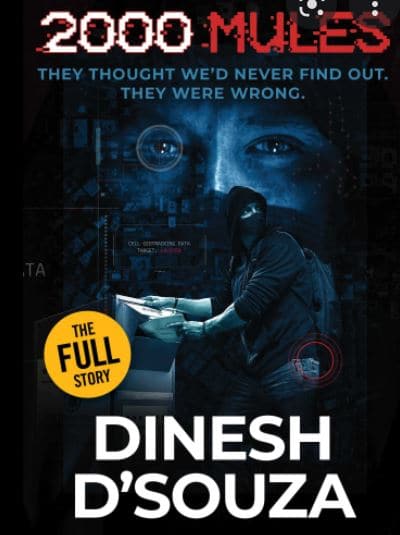 If you read reviews around the country, you’ll pick up that audiences have been packed in some locations.

Not so in Crescent City.

There were four of us at the 7:10pm Tuesday night, May 25 showing at Crescent City Cinema. Being frugal, I learned that Tuesdays are discount day. Instead of $7.50 a ticket, they’re $5. It’s playing through Thursday, May 26.

OMG! SHOCKING! The evidence is overwhelming. What evidence you might ask?

Did you know that the term “mules” refers to the people hired to stuff ballot boxes? Hired by who? Non-profits.

Did you know that donors like Marc Zuckerberg, George Soros, Warren Buffet and others contributed nearly $590 million towards the Democrat Party to aid in the fraudulent system..

Did you know your cell phones transmit far more data than we ever knew using GPS tracking? This aided in tracking down the mules and their drop box locations.

This is not an action packed shoot -em up expose. What it is is SHOCKING! And sickening. Not that we didn’t expect something underhanded. Trump being declared the loser just didn’t add up with the highest numbers of votes and thousands upon thousands that showed up at his speeches around the country. He received even higher number of votes than in the 2016 election. Compare that to Joe Biden sitting in his basement and unable to attract crowds… just didn’t make sense that he could ever be declared the winner under a fair vote.

After watching 90 minutes, you leave the theatre wondering what can be done next? Instead of the January 6th nonsense of “insurrection” why aren’t some of our alphabet government agencies investigating and arresting those mules and non-profits involved that stole the election of 2020? Why isn’t Biden being impeached?

Is it because the Democrats, leftist rulers of our country are so massive and entrenched, we’ll never make any headway in overturning this fraud?

Or will American’s fed up with this illegitimate Biden regime have to make waves to correct the situation via the end of drop boxes but instituting strong nationwide voter ID laws?

Or is this going to be the start of a second American Revolution?